The Barber’s first physical exhibition since reopening the museum in May is proving a hit with visitors and critics – thanks to the ten postgraduate students who curated the show entirely during lockdown.

The Daily Telegraph’s chief art critic, Alastair Sooke, gave Making a Mark – which explores the crucial role of drawing in the practice and careers of artists in the Netherlands during the16th and 17th centuries – a four-star review on its opening weekend.

Until a fortnight before the show opened, this year’s cohort from the MA in Art History and Curating had met only briefly in person, back in September, to view the Barber’s own world-class Netherlandish drawings, which includes masterpieces by Rembrandt and Van Dyck.

With the second lockdown, everyone pivoted online, a situation that certainly presented challenges – but one that also offered great scope for creative and rigorous learning for the group – opportunities they seized with determination and imagination.

MA exhibition co-ordinator Samuel Robinson said: “Developing the exhibition during the pandemic was certainly the trickiest – but definitely most rewarding – aspect to creating Making a Mark.”

The project is managed by the Barber, working closely with the Department of History of Art, Curating and Visual Studies and Royal Collection Trust, an innovative partnership now in its fourth successful year. It’s an immensely collaborative project, with weekly seminars under the supervision of academic course lead Claire Jones, Senior Lecturer, and the Barber’s Deputy Director Robert Wenley. The exhibition emerged out of a series of exciting teaching and ideas workshops in the different disciplines throughout the year, as well as developing from small working groups organised by the students themselves, all, of course, held on Zoom, Teams and WhatsApp.

“It was so important that we adapted quickly to working together remotely,” adds Samuel. “This meant many hours of trial and error, as we worked from home and searched for the best way to envisage our ideas.”

Curating the physical exhibition while operating online seemed to inspire the students and the Barber team more than ever, as they built on innovations piloted by last year’s postgraduate students, who organised 2020’s Sights of Wonder: Photographs from the 1862 Royal Tour. That had been initially planned as a physical show, but was transformed into a fully online exhibition following the first lockdown. For Making a Mark, the team again exploited to the full the potential of a microsite, using this to present additional interpretation, including fascinating essays on themes such as the role of women in the art world of the 17th-century Netherlands. Illustrated podcasts are also being produced that will be added the microsite over the summer, taking advantage of digital’s ability to be refreshed and expanded in a way impossible to do on site. 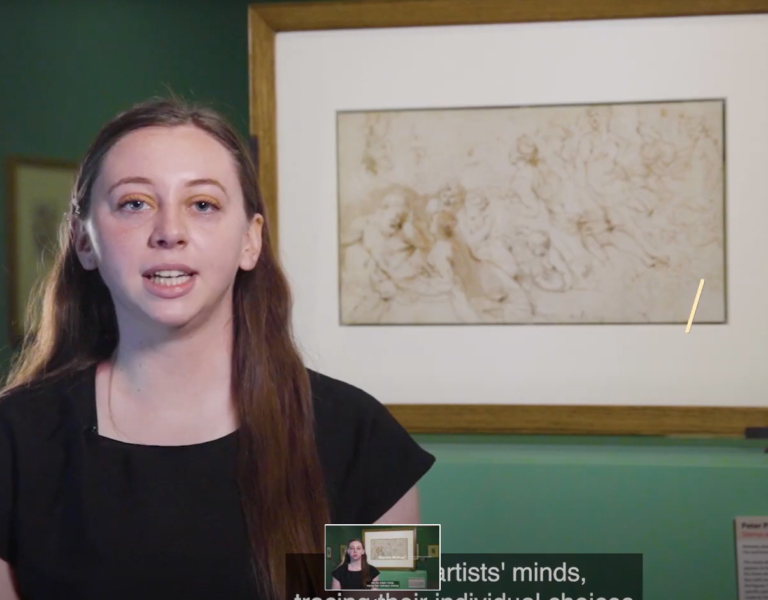 A scene from the promotional video

The students also scripted and spoke to camera for the Barber’s first ever promotional exhibition video – filmed, produced and posted on the Barber’s website in just four days. This incredibly impressive short film was launched at the exhibition’s Zoom press view. The students are also set to host and present a special online event for the distinguished Anglo-Netherlands Society in September.

As usual, the student curators have also contributed to the Barber’s Learning and Engagement programme and marketing activities.  They’ve helped to organise a series of practical workshops, working with Birmingham artists and art collectives, delivered online over the summer. These include a life-drawing session with Spirited Bodies, a nature-themed family workshop with Pippa Pixley, and further drawing sessions for adults with artist duo Hipkiss and Grainey. Also now running is a weekly website and social media #BarberDrawingChallenge with artist Mengxia Liu – which can be undertaken while listening to a thematically curated Spotify playlist, and a full social media programme up to the end of September.

At the heart of the project, however, is an immensely assured exhibition exploring the role and importance of drawing to Netherlandish artists – teasing the selection into a clever tripartite grouping exploring the overlapping themes of technique and studio practice, sources of inspiration, and the art market of the day. With its concise and appropriate interpretative texts, elegant and balanced hanging, and overall aesthetic appeal, it is hard to believe the show was created by so many minds, working remotely, without access to the gallery itself until the picture-hang itself.

While the facility of exploring artworks digitally is now part and parcel of the curatorial process, students found there was no substitute for seeing the actual objects themselves, particularly to appreciate the materiality of the sketches.

Natalie McKenna – the Barber’s Communications and Marketing Intern come September – explained: “It really doesn’t compare – online you can’t for example, really get the effect of the way an artist might use white chalk for highlights.”

Mya Roberts added: ‘There were things we missed on screen that we only noticed when we unpacked the works in real life, which was jaw-dropping moment for everybody; it was very special.”

It was certainly appreciated by Alastair Sooke at the Telegraph, who called the exhibition “an opportunity to marvel at artisitic virtuosity”.

Following the show’s opening, students were finally able to visit the Print Room at Windsor Castle, where the Royal Collection’s works on paper are kept.  They enjoyed a close up ‘private view’ of the many masterpieces housed there and a behind the scenes glimpse of the activities of Royal Collection Trust – a fitting reward for their many months of hard work which resulted in such an outstanding exhibition.

The Barber’s Director, Nicola Kalinsky, said: “Last year’s students began curating what they assumed would be a physical exhibition in the Barber, and transformed it into our much acclaimed first purely online show. Twelve months later, it’s fantastic to experience a beautiful physical exhibition curated online, once again demonstrating the ingenuity and resilience of these talented students.,.

“We’re repeatedly impressed by their resourcefulness, imagination and talent. They have created an exhibition that’s immensely enjoyable and absorbing, and positioned themselves as the stellar museums professionals of the future.”