In this image a lively crowd socialises under a canopy of trees, while cars speed beneath flashing signs and lights around them. Nevinson created a painting of the same title and subject in 1925. During this period, the artist was extremely productive and excelled at creating images of dynamic and claustrophobic urban scenes.

By 1919, Nevinson had declared his separation from Futurism and its ideals after being a strong proponent of the movement in London. Although this lithograph is more naturalistic than some of Nevinson’s earlier works (for example, Returning to the Trenches (1916), also in the Barber’s Collection), echoes of a Futuristic aesthetic can be identified in the artist’s depiction of light cascading across the angular panes of figures in the crowd. The image also highlights Nevinson’s interest in Expressionism, as the faces in the crowd verge on carnivalesque masks.

Bequeathed by Charles Branchini through The Art Fund (No. 2016.4)

SEE THIS IN THE BLUE GALLERY 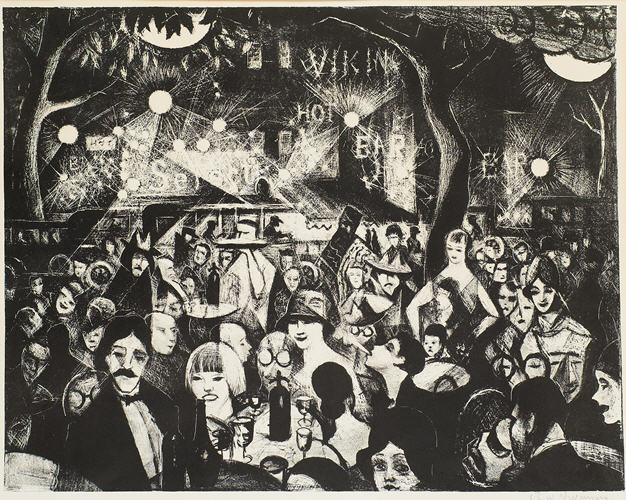