Wenclaus Hollar was born in Prague, but worked across Europe including in Stuttgart, Strasburg, Frankfurt and Cologne, where he became employed by Thomas Howard, the Earl of Arundel (1585-1646). Howard was a court member of King Charles I, and renowned for his collection of art and artefacts. King Charles and his court were interested in collecting and studying ‘curiosities’, like the insects shown in Hollar’s work.

Hollar is generally known as a landscape or topographical artist, although his studies also include women’s costumes and objects of natural history. The latter  combine scientific observation – typical of the spirit of the age – and visual pleasure in the extraordinary variety of forms of nature. These works derive from the tradition of natural history representation established by Joris Hoefnagel (1542-1600). Hoefnagel was the last important Flemish manuscript illuminator and one of the first artists to work in the new genre of still life. He is also known for the almost scientific naturalism of botanical and animal drawing, including ‘The Four Elements’, a four-volume manuscript of natural history miniatures, which included studies of insects.

Hollar made this print while he was living in Antwerp. There were originally twelve images in the set, but only nine have survived in this example today. The insects may have been copied from Thomas Howard’s cabinet of curiosities or from a set of coloured drawings in his collection. 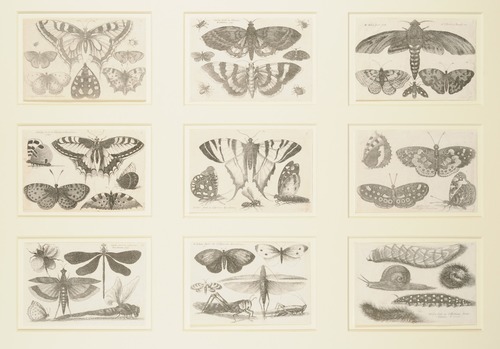