Miravan Breaking Open the Tomb of His Ancestors

Joseph Wright of Derby (1734-1797) painted the original of this work in 1772 and regarded it as one of his finest paintings.

The tale of Miravan was penned by the poet John Gilbert Cooper, who reworked the Greek historian Herodotus’ account of a Persian story. Miravan and his men break open a tomb hoping to find treasure inside. However, for disturbing the dead, Miravan is cursed never be at peace again. Green, soon to be appointed King George III’s primary mezzotint engraver, was quickly hired to copy the painting. His use of mezzotint perfectly captures the effects of the moonlit sky and oil lamps that create the dramatic light in this scene.

The study room is open to students, scholars and members of the general public, individually or in small groups, by prior appointment only. The room had tables and chairs to facilitate private study or seminars. 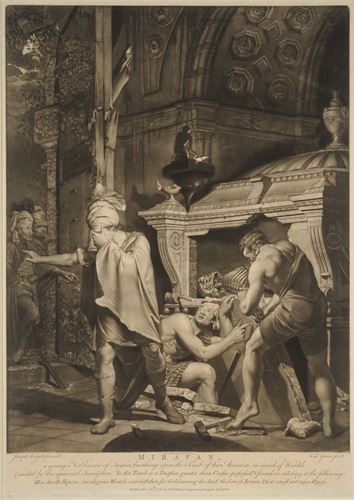