Head of a Spearman

This fragment depicts a bearded profile head of a Persian guardsman wearing a feathered headdress. A tongue motif is on the bevelled edge above the head. It is from a frieze on the Apadana in the city of Persepolis, located 30 miles northwest of Shiraz in the southwest Iranian province of Fars. The fragment is thought to have come from the north façade of the Apadana, a magnificent building that was often used for royal receptions. It was at the heart of the Achaemenid Empire, which was founded by Darius I in 515 BC and flourished for 200 years until defeat at the Battle of Issus by Alexander the Great and his Macedonian troops in 333 BC. It was only in the 17th and 18th centuries that the city of Persepolis and the art and architecture of the Achaemenid Empire was rediscovered. The fragment was probably removed from Persepolis during John Malcolm’s embassy to the Persian Gulf, in about 1810, and acquired by his naval escort Captain John Edgcumbe, RN (d. 1838).

SEE THIS SCULPTURE ON THE LANDING 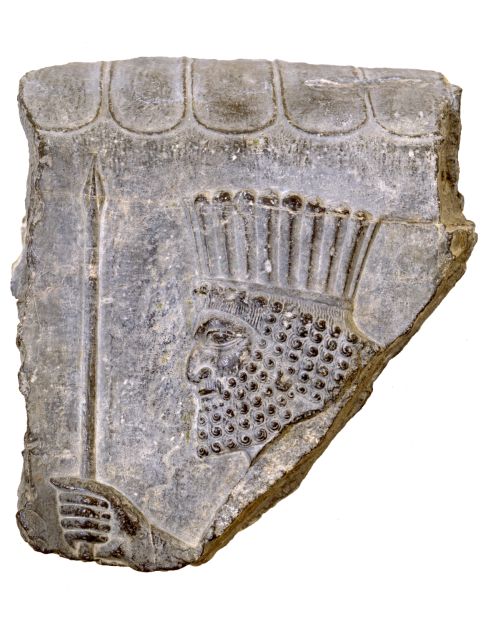