The bloodstone, a type of gemstone also known as a heliotrope, was probably fashioned into a bowl around 1600, perhaps in a workshop in Milan. The dolphin mount and the setting were created 200 years later by the leading British goldsmith Paul Storr. He worked for William Beckford (1760-1844), who owned many exquisitely crafted ‘Objects of Vertu’, as such settings of rich stones, mostly excavated abroad, were known. Heliotropes often came from India.

Beckford’s wealth came from his and his family’s involvement in the slave trade; at one point his father, Alderman Beckford, owned thirteen sugar plantations which enslaved 3,000 people in Jamaica. They were probably the largest, plantation and slave owners in the West Indies. Beckford also received financial compensation from the government following the Slavery Abolition Act in 1833.

The bowl appears in a painting by Willes Maddox from 1844, now in Beckford’s Tower and Museum in Bath, which depicts Beckford’s favourite objects in his home at Lansdown Crescent in Bath. Beckford was a passionate collector and became highly influential in the development of British aesthetics. Using the wealth he acquired through the slave trade, he amassed one of the greatest collections of paintings including works by Titian and Raphael, decorative art pieces and furniture in Europe at the time. He also commissioned  monumental buildings to house his collections, such as Lansdown Tower and Fonthill Abbey. His collection is now dispersed across numerous galleries and museums across the world, including the Metropolitan Museum of Art in New York, the Getty Museum in Los Angeles, the V&A, the British Museum, the National Gallery, the Fitzwilliam Museum and the National Museum of Scotland. 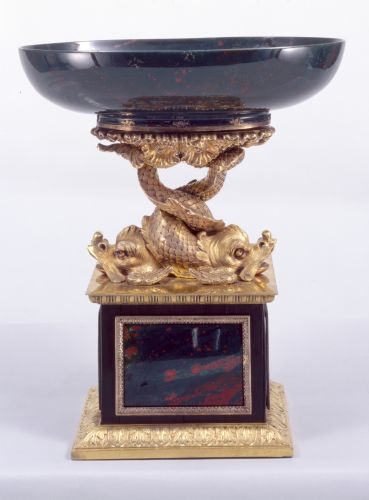