The teapot is engraved with the arms of William Beckford (1760-1844), the Gothic novelist, and those of his wife, Lady Margaret Gordon (1762-1786). His inheritance, at the age of nine from his father, Alderman Beckford, left him the richest person in England. This wealth was accrued through the family’s involvement in the slave trade; at one point his father owned thirteen sugar plantations which enslaved 3,000 people in Jamaica. The Beckfords were one of the largest, if not the largest, plantation and slave owners in the West Indies. William Beckford also received financial compensation from the government following the Slavery Abolition Act in 1833.

For this teapot, the use of gold, rather than silver gilt, reflects his extravagant taste and extreme wealth – and is exceptionally rare. It was made for the couple in the summer of 1785, just before Beckford’s exile in Switzerland from his home at Fonthill in Wiltshire, which would last for a decade. He was forced to leave the country following the exposure of his romantic relationship with 16 year old William ‘Kitty’ Courtenay (1768-1835), the heir to Powderham Castle in Devon. At this time, homosexuality was a criminal offence and punishable by death in England. However, the enforcement of this law would greatly depend on the social class of the person; no formal charges of homosexuality were brought against Beckford, as he was such a wealthy and powerful member of society. Even so, he had no choice but go into  exile – abroad. Kitty also relocated, separately, first to New York and later to Paris.

During Black History Month 2018, this teapot and stand was the focus of an alternative interpretation by UoB students in English, Drama and American & Canadian studies. They produced labels which interrogated artworks in our collection which depict, refer to, or have been collected from people of colour. This was a collaboration with the Barber’s Learning & Engagement Team; artist and poet Dzifa Benson; and Dr Asha Rogers, Lecturer in Contemporary Postcolonial Literature.

Here is an alternative label below:

Golden opulence that bares the rare ‘Britannia
Incuse Mark’. Unstained by those loose
leaves, to which it seems to correspond;
Shrouded in silence by the glass display case
who smothers its screams to be touched, held, used.

Its edges too painful, its gold too yellow in hue
with smells of earth metal and polishing agent.
Leaning towards the gleaming honey pool,
my distorted nose reflection is broken
by the crest, clad in a fish scale glimmer.

As I walk away, I imagine making a golden pot of tea
and wonder if it is even a teapot at all.
Or just an emblematic problematic
twenty-nine ounces of vanity
Pedestalled. 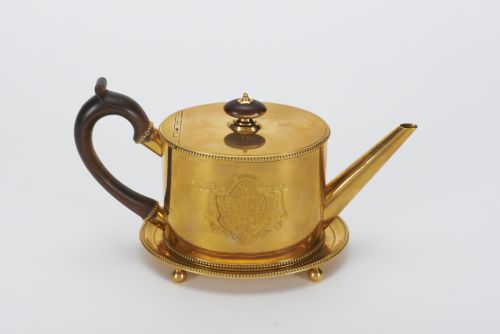