Alabaster, with traces of gilding and polychromy (coloured paint)

Saint James the Great, a fisherman, was one of the first Disciples of Jesus, who called him from the seashore. He is identifiable by his broad-brimmed hat adorned with a scallop shell, his emblem. He supports a long trailing scroll in one hand and a staff in the other. The distinctive style of his beard places him to the time of Henry VIII (reigned 1509- 47), the king whose dramatic break with the Roman Catholic Church brutally cut short the English production of such religious sculpture. A magnificent and much earlier Midlands alabaster, representing the Coronation of the Virgin, is located in the Foyer downstairs. 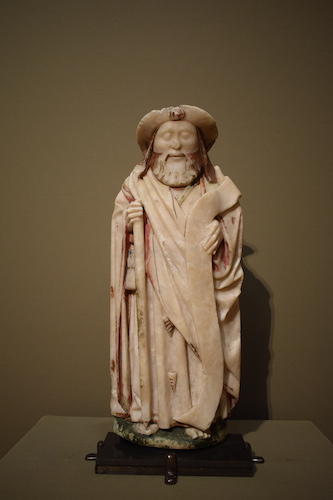