An Allegorical Tomb of the First Duke of Devonshire

This elaborate imaginary tomb of the Duke of Devonshire (1640-1707) was one of a series.

It was commissioned by Owen McSwiney to celebrate the political triumph of the Whig party following the Glorious Revolution of 1688.  The monument, intact amongst the ruins of the past, is visited by figures who discuss the Duke’s character and achievements, many weeping at his loss.  This exercise in political flattery was produced for the Duke of Richmond, a prominent supporter of William of Orange.

The Venetian artist Sebastiano Ricci painted the figures, tomb and statues, and his nephew Marco executed the landscape. 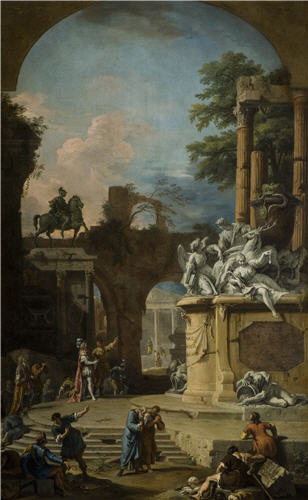