According to classical myth, the destiny of man is determined by the Three Fates.

They spin, measure, and cut the thread of life.  At the top, Clotho holds a spinning whorl from which comes the thread.  It is gathered by Lachesis, and cut below by Atropos with her shears.  The Fates are accompanied by a serpent, symbol of evil.  Behind, a broken column symbolises a life cut short.

Mazzoni’s choice of young women to represent the Fates, instead of old and ugly crones, adds a further sinister element.  The artist himself suffered cruelly at the hands of fate – he died after a fall down stairs. 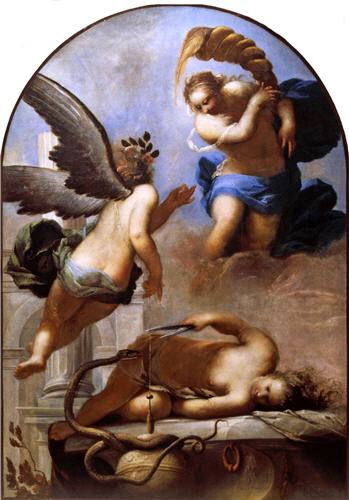