An intriguing eye miniature in the collection of the Victoria Art Gallery, Bath, was the starting point for this series of recent work by renowned contemporary photographer Bettina von Zwehl (b. 1971). While  producing a series of works inspired by historic painted portrait miniatures in the V&A and Bath’s Holburne Museum, Von Zwehl encountered a variant of the genre briefly fashionable in early 19th-century England, which featured paintings of single eyes from the members of one family.  Ruby’s Room (organised by, and previously seen at the Holburne) is her response – an exploration of her own family connections through immaculate and beautifully composed photographic portraits. The subjects are herself and her young daughter, Ruby, and eye portraits of her husband and Ruby, each mounted into jewellery by designer Laura Lee. It also includes challenging photographic eye portraits of children from Ruby’s primary school, and portraits of herself, Ruby and young girls and women, again inspired by miniatures in the V&A’s collection. 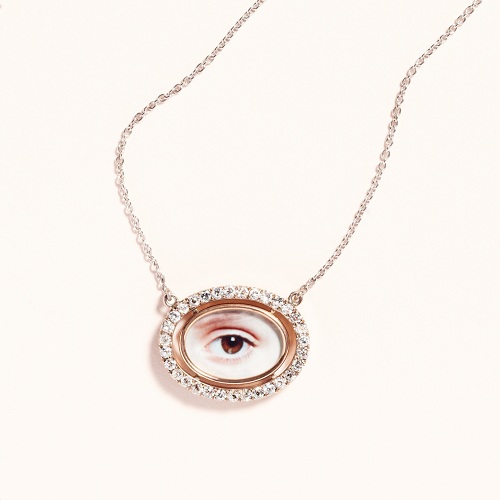 Ruby’s Room and other works in miniature