Rome began producing what may be considered proto-coins before the fourth century BC. These aes rude, as they are known, were essentially lumps of bronze or copper and are often found in hoards near sacred springs and fountains. The aes rude appear to have had no regulation of weight and are assumed to have functioned as part of a barter economy. These ‘coins’ then developed into aes signatum – cast bars of bronze with basic imagery of dolphins or fish spines. They are often found in fragments and often alongside aes rudes. In time these too start to be replaced by the aes grave – round, smaller and more coin like, with denominations marked by pellets, but still bronze, cast and iconographically simple.

By the late fourth century BC, Rome was issuing struck silver coins, more akin to what could be found in the Greek colonies in the South of Italy and presumably to enable Rome to interact economically with them. The issues are undated, however, and, being republican, they do not contain the images of rulers, as later imperial issues, to aid in dating the coins. Therefore the dating of Roman Republican coins was reconstructed through hoards. Republican coins do contain names, but names of otherwise unknown moneyers, who were given the right to strike coins for the Roman state by the senate. Imagery tended to be of gods and goddesses, mythical and legendary scenes, implements of religious practice or voting ballots. Gold coins are virtually non-existent for the republican period, and the silver fraction of the sestertius is also scarce.

Toward the end of the republic, the coinage was being more clearly utilised for propagandistic purposes – ancestors of senators hoping for election appearing to advertise their descendants’ senatorial credentials. It is often said that one of the reasons for the assassination of Julius Caesar was that he took this one step further and eventually had himself portrayed on the coins while still living. This is debated though, and not strictly true, but the coins of this period and their imagery are extremely interesting for anyone interested in politics and visual propaganda. The Second Triumvirate that followed Caesar’s assassination continued to use the coinage to promote themselves and their unity as a triumvirate, even though the ensuing civil war from its collapse marks the end of Roman Republican coinage and the beginning of Roman Imperial coinage. 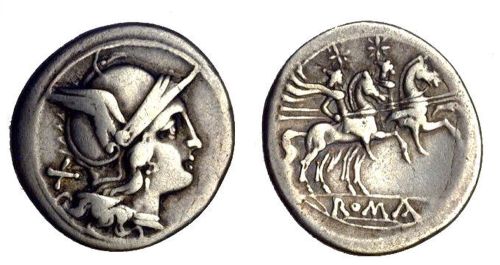