The Barber Institute has a significant collection of Roman coins, including both republican and imperial issues, as well as a substantial number of Roman Egyptian tetradrachms. The Barber’s Roman coins total just over 5,000, out of the 16,000-strong collection.

Roman coins are considered to continue until the reforms of Anastasius I (491-517) in 498, whereafter the coins are designated as Byzantine (for which see here, or for the Early Byzantine period (491-c.830) see here). Those from the end of the house of Constantine (363) to the accession of Anastasius I (491) are considered as Late Roman, while Octavian becoming Augustus marks the line between the Roman Republic and the Roman Empire (both numismatically and historically). While the majority of the Barber’s Roman coins come through the donation of Geoffrey Haines, the Barber also possesses just over 1,000 Roman Egyptian tetradrachms through the donation of Philip Whitting.

While the Roman Republic’s monetary system worked on, effectively a bimetallic system, using silver and bronze coins (gold Republican coins did exist, but were extremely rare), the Roman Empire functioned on a more tri, and in the early Empire quad, metallic system – gold, silver and bronze (and orichalcum for the early Empire). The coinage of both the Roman Republic and Roman Empire was incredibly varied, being produced by different moneyers for various senatorial families, then at various mints and semi-independent cities (whose coinage is known as the Roman provincial coinage) for various members of the imperial family, including wives and daughters.

The Roman coinage was incredibly influential in the development of later medieval and modern European, and some West Asian coinages (for example, the coinage of the Turkman states, for more about which see here). The profile laureate bust was used on most European early modern coinages, and is still influential in the portrayal of the UK’s monarch on coins, and the Netherlands’ monarch on Dutch euros and cents. Rome’s denarius also lent its name to the medieval Arabic dinar, the currency of a number of modern states. 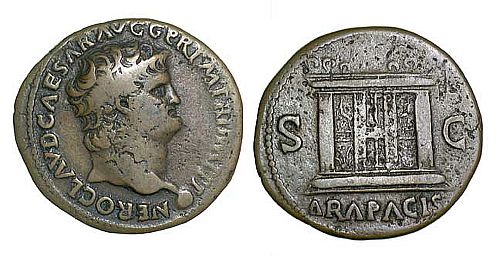