Henri Rochefort-Luçay was a radical journalist, art collector and patron, noted for his remarkably wild hair and equally fierce opinion.

The original plaster model was made in about 1884, but this version was carved, perhaps by Rodin’s marble-cutter Henri Lebossé, as late as 1902. It brilliantly captures the fiercesome intensity of the subject. The bust was acquired from Rodin by one of his greatest admirers in England, Edward Perry Warren (1860 – 1928), of Lewes, who also owned the celebrated marble The Kiss (Tate). ‘Rochefort as Mephisto’ was how one early critic described the bust to Rodin, who replied mischieviously: ‘Yes, that is the intention’. One of the finest of all Rodin’s portrait bust, the work possesses a passion and intensity that rival those of Manet’s celebrated portrait of Rochefort of 1881 (Kunsthalle, Hamburg). 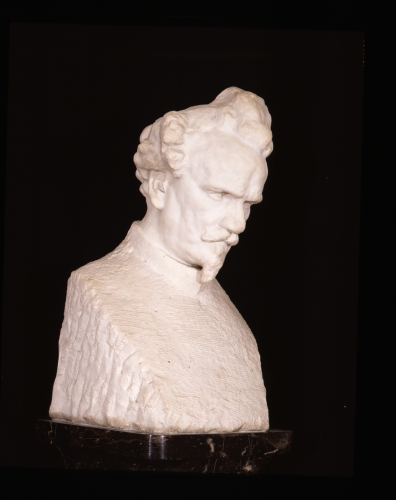