This crucifixion scene is based on a painting of about 1526 by the German artist Matthias Grünewald.  Redon preserves Grünewald’s central focus, with the weight of Christ’s body bending the cross.

However, the grieving figures of the Virgin Mary and Saint John recede into a shadowy realm, and the artist tones down Grünewald’s bloody realism.  Instead, Christ’s physical suffering and the mental anguish of the witnesses are evoked by colour.  As a leading Symbolist artist, Redon developed his own personal visual language to conjure up meanings. 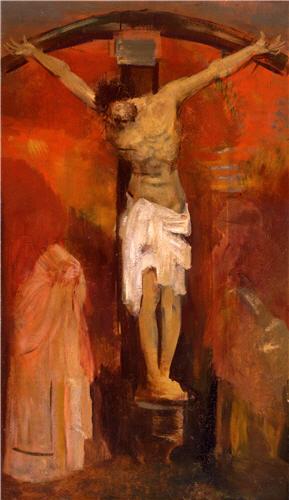