Saint John the Baptist Leaving for the Desert

Saint John, dressed in camel skin, takes leave of his parents outside the walls of Jerusalem.  He journeys to begin his life as a preacher in the desert, which will culminate in his baptising Christ.

The panel formed part of the predella, or lower part, of an altarpiece of the Annunciation.  The scene is framed by bisected balusters which would have linked it to four other panels.  The altarpiece was commissioned by a wealthy Florentine.  This may explain the inclusion of Saint John, who was the city’s patron saint, and the use of Florence as the model for Jerusalem. 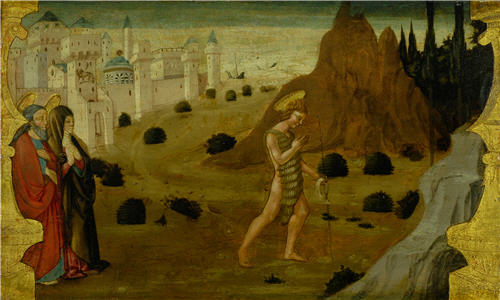