With its radical urban subject matter and its lyrical palate of wintry hues, Men of the Docks, 1912, became the first painting by George Bellows acquired for a UK public collection when it was purchased by the National Gallery in 2013. Just a year later, his Nude, Miss Bentham was purchased for our gallery by the Henry Barber Trust – and the two paintings will hang here side by side this season.

The leading artist of New York’s early 20th-century ‘Ashcan School’, Bellows documented an important phase in the social history of New York City – a theme explored in an exciting programme of events accompanying the display and based on new research by the University’s Dr John Fagg and students from the University’s American and Canadian Studies Centre. 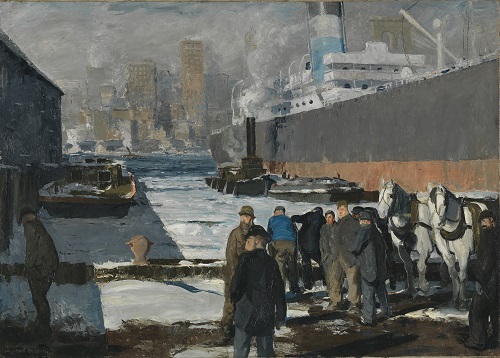 The New York of Bellows and Sloan

Singing and Seeing the Port of New York

INTRODUCTION TO ‘MEN OF THE DOCKS’