Ludlow Castle, from the North West, with the River Teme

Pencil, watercolour, scratching out on paper

Turner visited Ludlow in the summer of 1798 when he made a number of studies of the ruined castle and its surrounds.

The pencil drawing of this scene was partly finished in watercolour and Turner then showed it to potential patrons. Three of them commissioned large finished watercolours showing this late afternoon scene. A work such as this would then have been framed and glazed for display.

At this early stage in Turner’s career the artist employed a relatively muted palette which reflected his ambition of producing watercolours which might compete in effect with oils. 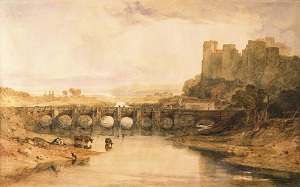