In 1804 Turner began renting Sion Ferry House at Isleworth in Twickenham and spent the summer of 1805 making oil sketches from a boat on the Thames.

This print is based on those sketches and was published in the penultimate thirteenth part of Liber Studiorum. Turner’s residence is known from contemporary prints to have been just east of Isleworth church beside a classical pavilion. The print depicts the very locality of the ferry house and exemplifies Turner’s autobiographical tendencies in many of his landscapes. In comparison to Isis (Inv. No. 39.14) the plate is lighter and looser in style. The etched line is used to create tone rather than just outline. This can be seen in the reflections of the trees in the right foreground. Turner lifts the tone to the left with the bright white of a sail – a device originally borrowed from the contemporary watercolourist Thomas Girtin (1775-1802), and subsequently used throughout his career. 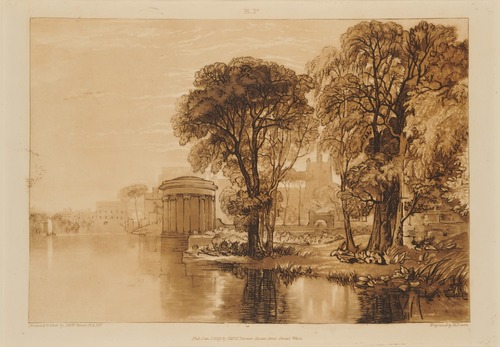