Etching, with mezzotint by W. Say

This image is highly reminiscent of Claude Lorrain and belongs to the elusive ‘E.P’ category.

It was published in the forteenth and final installment of the Liber Studiorum series. The ruins in the foreground create a strong sense of an idealised ancient setting,  transcending the landscape of the Thames. As indicated by the inscription, this print is after a painting belonging to the Earl of Egremont, a major patron of the artist. This was ‘The Thames at Weybridge’ (c. 1807-10, Tate). The image was retitled for the Liber Studiorum with the name of a celebrated Egyptian deity, creating a past for England which is not her own. ‘Isis’ combines Turner’s love of architecture and antiquity, which can be seen in the contrast between the classical foreground and the distinctly English countryside on the opposite ban of the river. The pavilion in the centre allude to the temple at Tivoli in the Roman Campagna, and reflects landscape gardening in the picturesque style that was the contemporary fashion. 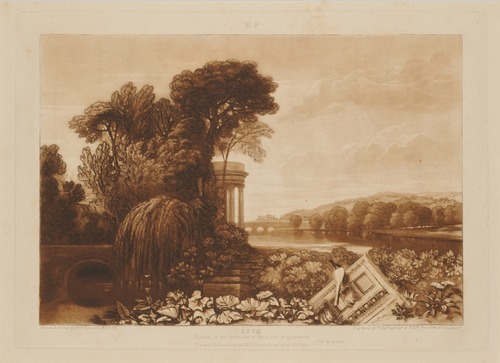