Henricus I (Henry the Fowler)

Klauber, a successful print maker and publisher in Augsburg, was greatly influenced by nature and medieval history. This richly detailed scene is one of thirteen he created featuring birds and hunts.

A 10th-century German king, Henry I is generally considered to be the founder and first monarch of the medieval German State. Under the German Confederation, Henry I united the duchies of East Francia, Saxony, Swabia and Bavaria and regained Lotharingia (Lorraine) in 925. An avid hunter, Henry was called ‘The Fowler’ because he was supposedly fixing his birding nets when messengers arrived to inform him that he was to be king. 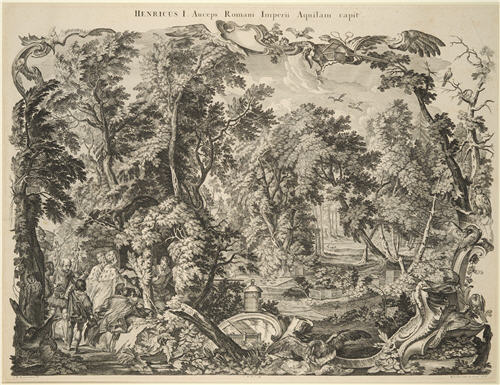