Two men are digging in an inhospitable landscape.

Their strong shoulders, curved backs and widely planted legs suggest the strenuous nature of their task. Millet often regarded peasant figures as evoking a sense of eternal and timeless toil in an unforgiving world. He un-idealised visions were seen by many of his contemporaries as representing the heroic and exploited worker, and therefore calling for drastic change in the lives of France’s peasants. Millet influenced Vincent Van Gogh’s early sty;e; a comparable scene of rural labour by Van Gogh is in the Barber Institute’s collection, entitled ‘A Peasant Woman Digging’, 1885 (No.61.8). 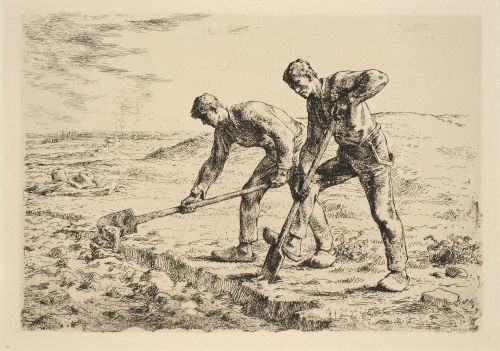