This drawing is a copy of a painting attributed to Leonardo da Vinci (1452-1519) in the Louvre, Paris. It was thought to represent a mistress of Francis I; legend stated the sitter was the wife of an ironmonger – a ferronnier – who became the mistress of King Francis I. She is now tentatively identified as Beatrice d’Este, wife of Ludovico Sforza.

Ingres’s work precisely traces the subtle contours of the painting, revealing his skills as a draughtsman. However, it omits the parapet at the bottom of the original painting. Ingres made countless copies after the old masters. Copying the old masters was considered a vital practice for young artists, by which they could develop their own artistic skills and knowledge. This drawing was made when the artist was a student in Paris, studying under Jacques-Louis David (1748-1825). He presented it to his master David before he left for Rome in 1806. 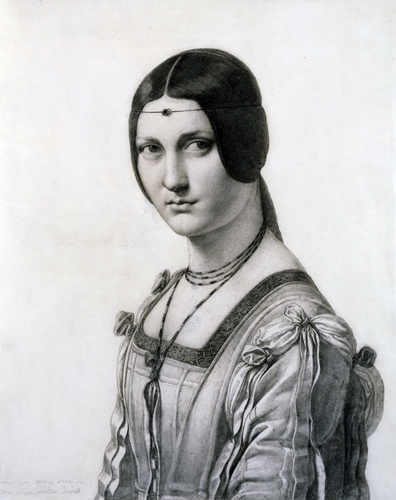