King Ahasuerus rises in fury as his wife Esther reveals the treachery of his chief minister Haman, who cringes to the left.

According to Bible, Haman plotted to massacre the Jews in the Persian empire.  Queen Esther summoned the two men to a banquet where she revealed the plot and her own Jewish identity.  The King’s violent reaction overthrows a vase and a peacock pie – symbol of Haman’s fallen pride.

Jan Steen is better known for his exuberant scenes of peasant life, full of humour.  Even in a biblical story, a love of melodramatic drama and colourful detail shines through. 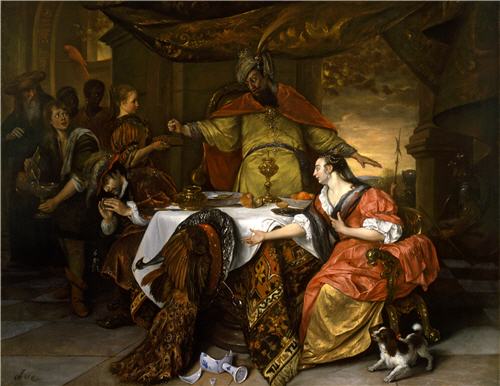