Study of a Tree with a Figure

Red chalk, over squaring in black chalk, on paper

Robert was a garden designer as well as a painter and trees formed an important part of his landscape subjects. He was also a prolific draughtsman, invariably using red chalk, a medium he used with enormous subtlety. Many of Robert’s drawings were finished compositions made in the studio and sold directly to collectors.

This study of an ancient, blasted tree, however, may have been made from nature. Certainly, the fact that it is squared up in black chalk – to help with the process of transferring the image – suggests that it was used as preparatory material for a finished work. 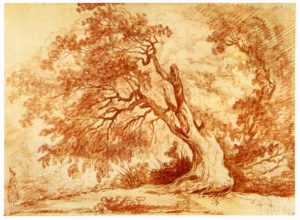