Degas’ interest in horses is evidenced by his numerous paintings with racecourse subjects, such as the Barber’s magnificent ‘Jockeys Before the Race’ of c.1878-79. This model may have been inspired by a photograph of ‘The Trot’ by Eadweard Muybridge (1830-1904), the pioneering English photographer of animal locomotion, first published in France in 1881. A Horse Trotting is number 11/T out of 22 casts made posthumously from a wax model found in Degas’ studio after his death.

THIS WORK IS NOT CURRENTLY ON DISPLAY 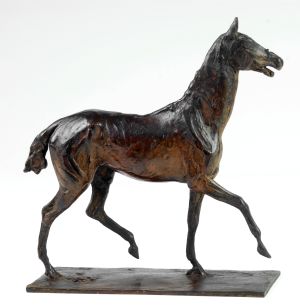