The companions of Cadmus devoured by the dragon

Goltzius worked with the artist, Cornelius van Haarlem, at the ‘Academy’ of Harlem, who made the painting (now at the National Gallery London) from which this engraving derives.

Ripping claws, fangs gouging deep into flesh, scattered heads and shredded bodies provide a graphic portrayal of the fate met by the companions of Cadmus. The opposing forces of the upward thrust of the dying companion’s arm and the downward plunge of the dragon’s neck combine with the contorted male forms to create a sense of emotion in this depiction of an episode from Ovid’s, ‘Metamorphosis’, III: 28-63. 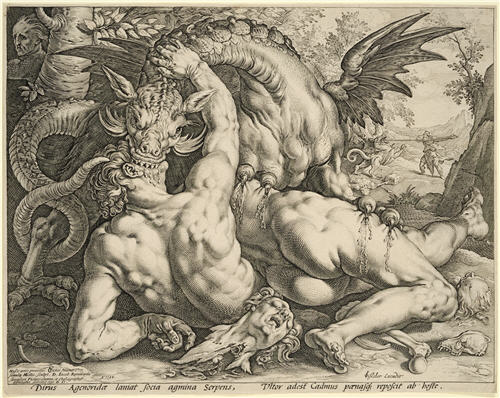