Hercules raises his club ready to strike Cacus, a fire-breathing monster, who cowers beneath him.

The cows, which Cacus had stolen from Hercules, crowd the right-hand side. Secondary characters add to the chaos of the scene by cluttering the background. The focus, however, is firmly on the triumphal Hercules at the centre of the composition.

This print is built up with layers of yellow, yellow green and black inks.This use of colour emphasises the highlights in Hercules’s straining musculature, and dramatic details such as the lion pelt and human skull. Goltzius was interested in woodcuts as an independent medium  rather than as a way of copying paintings, and was particularly drawn to exploring unusual poses and anatomy. 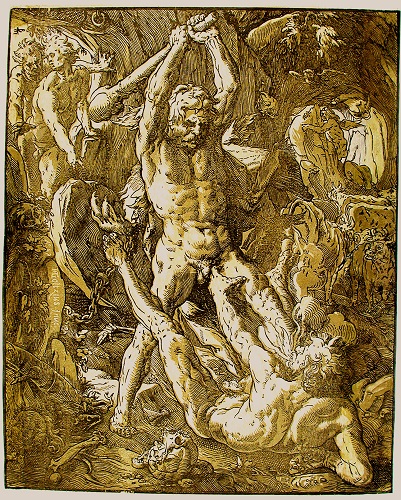