Pen and grey wash with traces of black chalk

Hans Holbein the Younger, later court painter of Henry VIII, made several designs for stained glass windows in his early career. The inclusion of a mitre and crozier suggests that the design was probably made for a newly appointed abbot or bishop.

The inclusion of the Virgin Mary and Christ Child implies that design was created for a church dedicated to the Holy Family. The angel on the right appears to have just unveiled the mitre and crozier, which were  symbols of power, highlighting that it is a newly earned position. For the window, the blank shield would have been finished with the coat of arms of the owner. In this drawing it is just possible to make out what looks like an arrow in the bottom left corner of the shield. 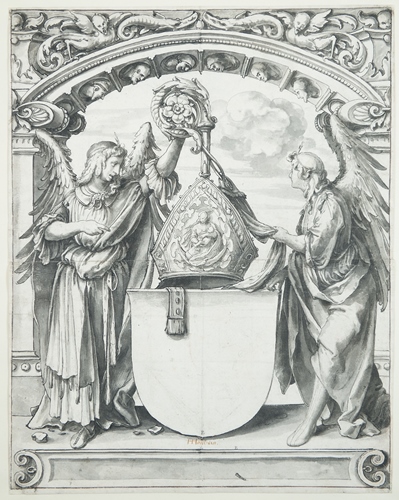