This engraving is from a series entitled Views of Rome. In this etching, Piranesi depicted the impressive gardens of the Villa d’Este in Tivoli, originally built for Cardinal Ippolito II d’Este (1509-1572).

The inclusion of tiny figures on the steps emphasises the scale of the grounds. The garden is dominated by water; it gushes from rams’ heads, bursts from floral fountains and cascades down an immense tiered structure that links the villa to the garden level. These water features combine the practicality of irrigation with a demonstration of wealth and power. Elite status is implied not only because of the expensive technical elements involved in creating a complex water display, but by the very act of frivolity with such a precious resource. 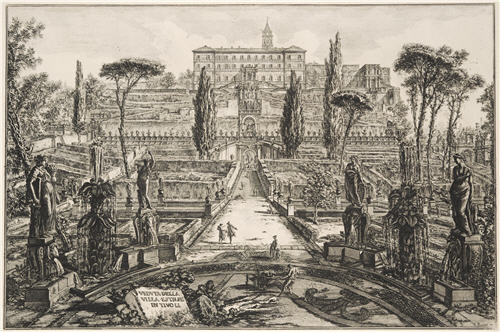