The Loggetta (1537-40), at the base of the campanile, or bell tower, in Saint Mark’s Square in Venice, was built as a small assembly room.

Canaletto’s painting was cut down at an unknown date, perhaps so that it could fit over a door.  It originally showed much more of the campanile therefore.  The tower was painted out at the time of the alteration and it was only revealed again when the work was cleaned in 1964. Canaletto was the best known of the 18th-century Venetian topographical painters whose views of the city were primarily sold to foreign visitors. 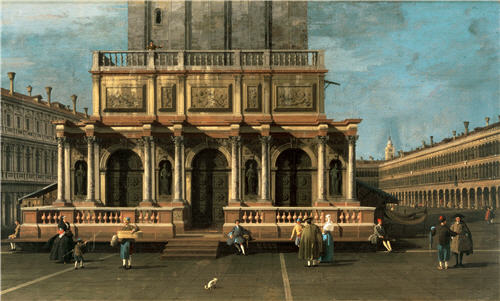