In the privacy of her tastefully uncluttered home, a young woman intently reads a book. Her delicately ringleted head cranes towards the pages, slightly disturbing her otherwise impeccably upright figure, which sports a fashionable late-18th-century empire waistline. A cat is settled on her lap, while her son stands listlessly at her side. This is the scene shown in the oil painting The Enigmatic Reader, which has recently been identified by leading expert Dr Carole Blumenfeld to be the work of the French artist Marguerite Gérard (1761-1837). The picture was made in about 1817 when the artist was at the height of her successful career, which lasted fifty years and survived the French Revolution and the Napoleonic Wars. Gérard’s paintings were purchased by Napoleon and Louis XVII, and celebrated at the Paris Salons. However, she did not always follow convention; she turned down a place at the French Royal Academy and never married.

After training with her famous brother-in-law, Jean-Honoré Fragonard, Gérard carved out her own style and subject matter. Her greatest inspiration was 17th-century Dutch genre paintings, which she re-invented by focusing on female figures within intimate domestic settings. The Enigmatic Reader is an exquisite example. Here Gérard references several details often found in Dutch genre paintings – the blue-and-white Delftware inspired by Chinese porcelain and an oriental rug used as a table covering, while permeating the scene with the playful ambiguity that characterised such masterpieces. The woman is distracted from her motherly duties by her book, possibly a sentimental novel with a romantic plot line, which was highly popular in France at the time and coincided with a great surge of female readers. Such amorous themes are echoed by the inclusion of a bird cage and canary in the painting hanging on the wall. There is a long tradition of artists using birds as sexual symbols, notably in 17th-century Dutch painting, with canaries signifying pent up passion waiting to be released. With these details in mind, Gérard playfully reveals how the ambiguous mixture of eroticism and moralism that characterises the sentimental construction of femininity engenders a similarly ambivalent response in the viewer. 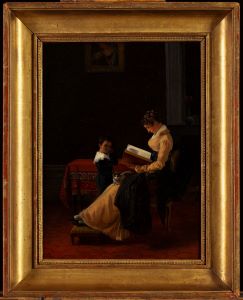