Cox uses warm browns and reds to depict two men travelling through woodland towards Hardwick Hall, which can be seen in the distance.

Hardwick, a celebrated Derbyshire country house built in the 1590s, was among Cox’s favourite subjects. He frequently depicted the interior of the house, and visited it numerous times, so that many of the staff knew him by name. Here, he portrays the journey to Hardwick rather than the house itself. Cox’s pastoral landscapes typically contain figures, and the presence of the two travellers adds an engaging narrative element to this landscape. 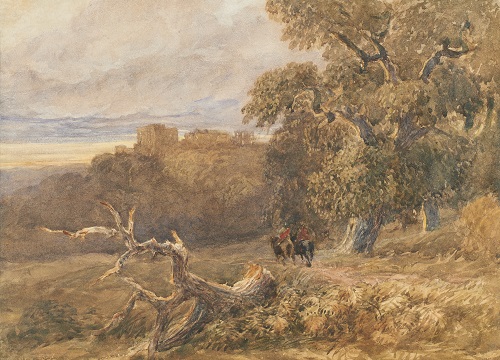