African Boy Riding a upon a Billy-Goat

The boy holds a shell, cast from an actual specimen of a common Mediterranean mollusc, and probably intended to hold ink. Therefore, this is ostensibly a functional object, likely for a scholar’s desk. In the Renaissance goats were common Bacchic symbols representative of unbridled procreative instincts, and shells were often a symbol for female sexuality, associated with Venus. The textured surface of the goat’s body resembles the extensive hammering that features on most autograph bronzes by Riccio, the leading Paduan sculptor of his day. Scholars have long debated this attribution and raised suspicions that the work is a 19th-century pastiche. Indeed, some aspects (such as the modelling of the hair) do not seem characteristic of Riccio’s style. However, technical study and new research into its provenance have confirmed that it dates to the 16th century. The bronze is traceable to the collection of Jacques-Laure Le Tonnelier, the bailli de Breteuil (1723-85), ambassador of the Order of Malta in Rome (1758-77). The elaborate 18th-century base is attributed to Luigi Valadier (1726-85), the most esteemed goldsmith in Rome, whose clients included the Pope and the bailli de Breteuil himself.

During Black History Month 2018, this bronze was the focus of an alternative interpretation by UoB students in English, Drama and American & Canadian studies. They produced labels which interrogated artworks in our collection which depict, refer to, or have been collected from people of colour. This was a collaboration with the Barber’s Learning & Engagement Team; artist and poet Dzifa Benson; and Dr Asha Rogers, Lecturer in Contemporary Postcolonial Literature.

The boy to the spectator:
“you think i willingly straddle his rump
and comb my hands through his hefty horns
BUT!
they are stuck to it by sculptors moulding metal
and every night I wait to roll over and walk outside the glass”

What you see is not a symbiotic relationship
The boy is a human
The goat is an animal
But both are made beasts by men.

How time seems to slow to nothing
when you have to be three things
at once – custodian of history’s
deep mythic time, arcane iconography
and a word that causes offence.

Il Riccio’s Strombus Giga overwhelms
his slight shoulders, the hissing
in the gigantic conch eats the air
for the din and drift of unwise things.
The boy’s arm fuses with goat’s horn
tethering the artist to the posterity of a lie.

Boot-lace black asks: Where does it go to graze and chew the cud?
Liquorice black says: They believed goats to be sexually mature at only seven days.
Soot black says: History and language history are that solitary, sacrificial goat.
Obsidian black asks: Whose thin skin of woman born sows panic, warps creation?
Blood black says: yours, not mine, is pulled from the world beyond my figure.

In the conflict between the divine and bestial
Mr Oseji maintains the boy had a soul.
Come closer folks, there is everything
to see here. A record of taste and knowledge
never off duty, in Riccio’s bronze. 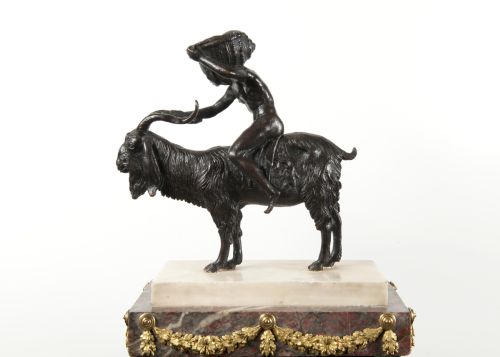