A Sheet of Studies

This sheet contains nine studies of five different figures and is the most important and complete set of studies by Rembrandt to survive intact. Many others appear to have been cut up at a later date. The exact dating is unclear, but appears to date from the early part of his career. It may have provided a repository of characterful types for reuse in later compositions and a reference set of models for students to copy. Indeed, the figures are mostly tronies (fantasy head studies).

The central figure – a plump man wearing a fur coat and a plumed hat – appears to have been posed in a studio. The two male figures on a lower left also show individualised features. The studies of a woman nursing her child appear less deliberately posed and may have been drawn from observation of his wife Saskia.

The use of three different media and the careful placing of the studies on the sheet demonstrate Rembrandt’s apparently effortless and inspirational drawing style. The variety of different types of study, and media, as well as their bravura and freedom, are what makes this sheet so interesting. 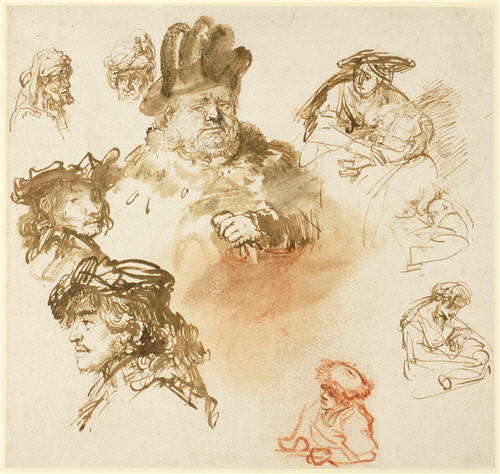