Soldiers’ Graves Between the Lines

The full moon leers over the churned earth of a rat-infested mass grave; shattered body parts erupt from the soil.

This nightmarish image is part of Dix’s print cycle Der Krieg (War), 1924, based on his memories as a soldier. Like many young German artists, Dix at first believed the First World War would be beneficial to society, cleansing it of social and political corruption. However, his experiences were filtered and intensified during the intervening years, and here the horrific reality of war is expressed in the basic elements of cross, dirt and bone. 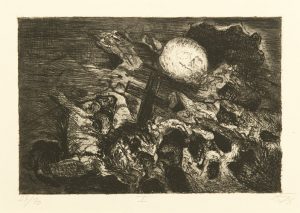