Overlapping scenes of wounded soldiers, prostitutes and bourgeois businessmen in a crowded and war torn metropolis were typical of Grosz’s work following the end of World War I.

In 1914 and 1917 he was called up for service but was discharged within months following episodes of violence and time in a mental hospital. This hectic composition signifies Grosz’s hatred of German militarism. 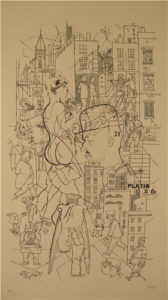