The Triumph of Realism

Du Maurier was a Franco-English illustrator, author and cartoonist. This drawing was made for the satirical magazine Punch (1841-2002).

The magazine is responsible for coining the word ‘cartoon’ in its modern sense, as a humorous illustration, rather than just signifying a preliminary sketch. Du Maurier joined the magazine in 1865 and soon created his own set of characters, usually making fun of Victorian society. In this drawing, Blenkinsop gazes contentedly at a bust of himself made by a fashionable sculptor. To his companion he says: “It’s not so much as a work of art that I value it, Brown! but the likeness is so wonderful you know!”.

The study room is open to students, scholars and members of the general public, individually or in small groups, by prior appointment only. The room has table and chairs to facilitate private study or seminars. 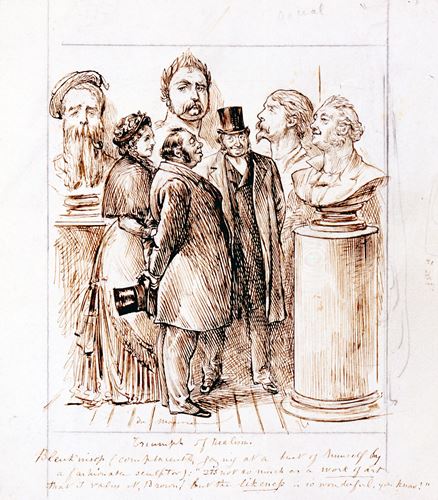