Visualising the divine on Byzantine and Early Islamic Coinage

Epochal moments in the early histories of two of the world’s great religions – as illustrated by the currencies their followers created and circulated – are explored in this absorbing exhibition.

Coins have always provided a stage on which the dramas of religion and politics, statehood and rebellion, marriage and succession, and triumph and desperation are played.

In the early seventh century, the East Roman Emperor Herakleios requisitioned silver from Constantinople’s churches to pay his army. The coins bore the petition ‘God help the Romans’.

A generation later the leader of the first Muslim Empire, the Umayyad Caliph Abd Al-Malik, created a gold coinage emblazoned with Islamic verse, establishing a blueprint for Muslim coinage for centuries.

The origins, meanings and manufacturing processes of coinage in the neighbouring Byzantine and early Muslim empires are explored in this exhibition, while two beautiful sacred also reflect how attitudes to depicting religious subjects differ between Islam and Christianity.

The relationship between these two empires was characterised by a constant dialogue of trade, intellectual exchange and military confrontation. This display explored how currency was used by each to assert cultural difference and promote its own concept of the divine.

Curated by Rebecca Darley and Daniel Reynolds, with Ali Miynat and Maria Vrij.

The personal prayer scroll of Eudocia!! What a treat! – Benjamin Aktinson, Birmingham

A far-sighted and intelligent use of the Institute’s materials to make cogent points on the history of today’s unities and divisions – Heather, Cheshire

So cool – especially loved the comparison of the Queen on the 2p to Herakleios! – Kate Schroeder, Kansas, USA

It’s lovely to see this display.  It has made me happy to see it – Joseph Parsonage, Bedford

A rare and beautiful 13th-century Byzantine prayer scroll has been installed in the Coin Gallery at the Barber Institute of Fine Arts, University of Birmingham prior to the opening of the latest exhibition Faith and Fortune: Visualising the Divine on Byzantine and Early Islamic Coinage, which opened to the public on FRIDAY 8 NOVEMBER.

It will be the first time the  prayer scroll of Princess Eudokia Doukas – one of only two known examples from the entire Byzantine period of an illustrated prayer scroll where the original owner can be named – has been on display in public since its recent discovery (there are only 25 Byzantine prayer scrolls in existence, only two where the identity of the original owner is known). The property of a private collector, this beautiful illuminated manuscript is written in medieval Greek on vellum, and depicts the Princess – member of a prominent aristocratic family in Constantinople, who counted a number of emperors among her ancestors. Devoutly clasping her hands in prayer, the Princess is shown gesturing towards the seated figure of St John Chrysostom, who responds with a traditional sign of benediction. 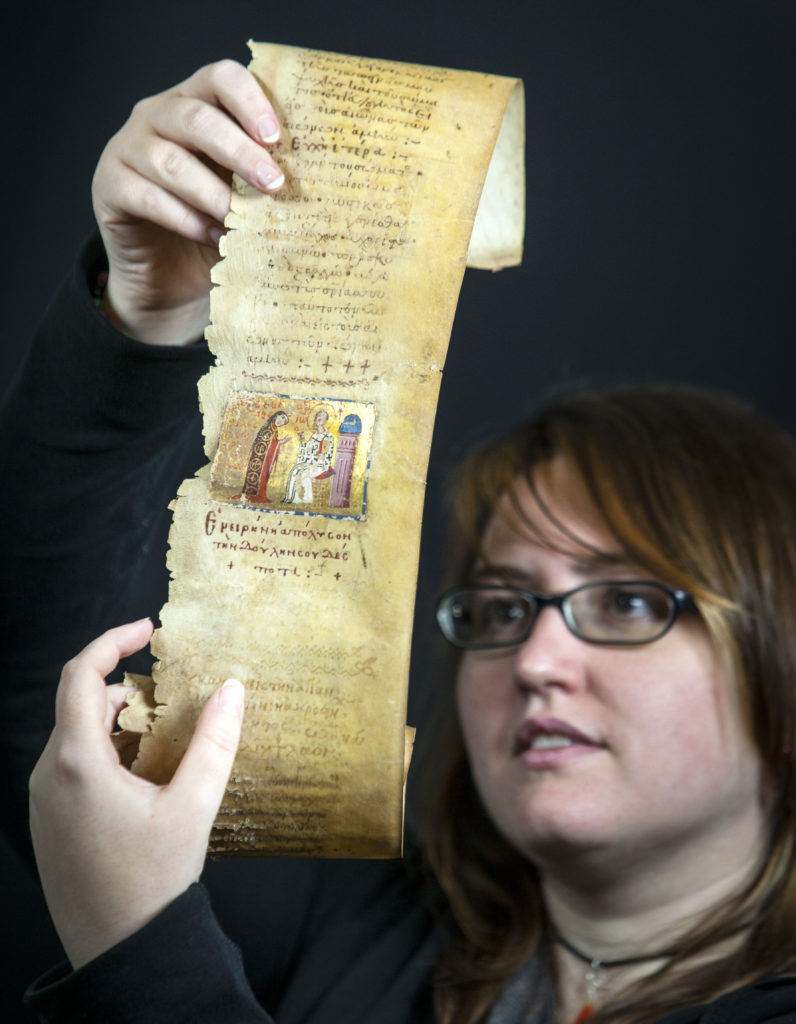 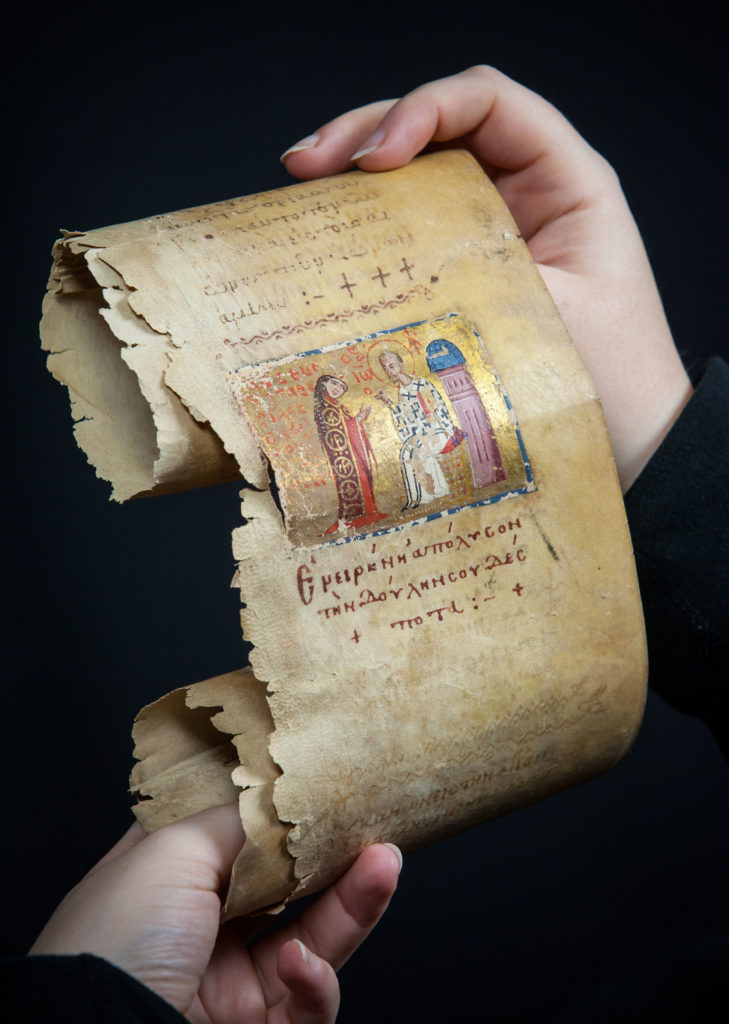 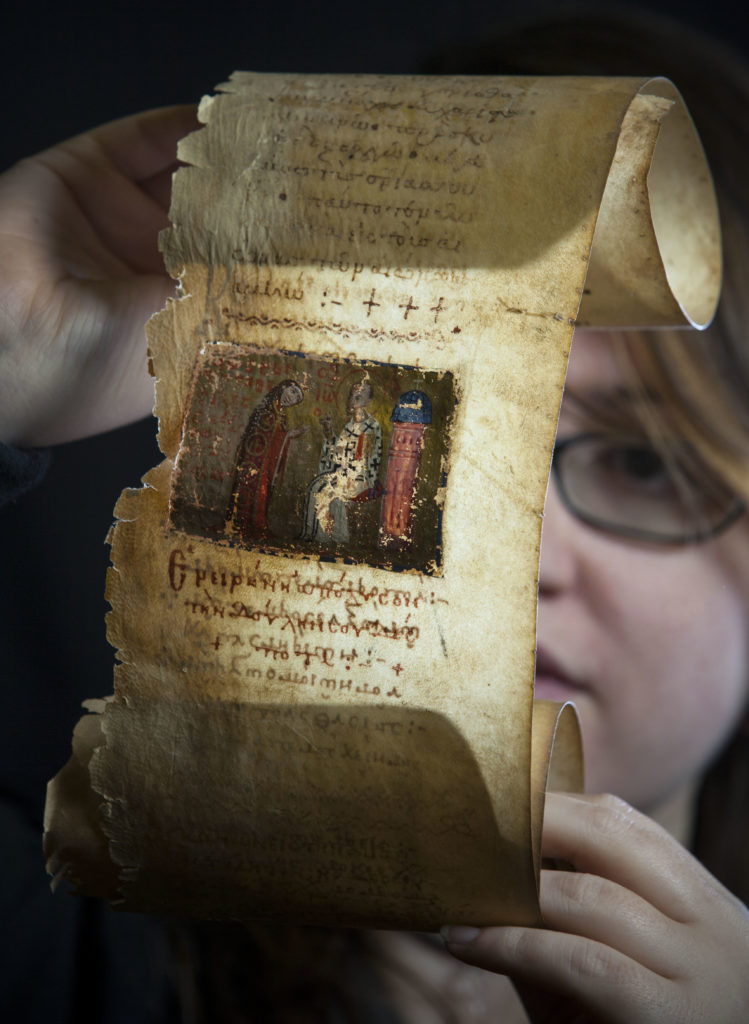