This panel is painted on both sides and it formed part of an altarpiece or a screen illustrating the life of the Virgin Mary.

She is shown in a nocturnal scene adoring the infant Christ. Two shepherds approach through the door to the right, and Joseph with a lantern enters from the left. A different note is struck by the angels who are grief-stricken by the realisation of Christ’s fate. The infant lies on a stone, symbolising the altar used for the mass, and on a wheat sheaf, representing the communion bread. 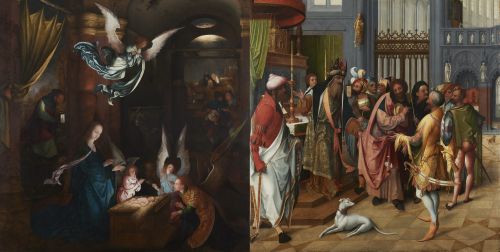