Unrecorded Edo Artist from the Royal Artisan Guilds of Benin

This Ikegobo (altarpiece) comes from the Kingdom of Benin, now southern Nigeria, in West Africa, specifically its capital, Benin, a city known for its centuries-old tradition of metal castings using complex and highly skilled techniques.

Only royalty and privileged chiefs owned these pieces and all were men with one exception – the Iyoba (Queen Mother of the Edo people), who is celebrated in the Ikegobo at the Barber. Iyobas were the only women to occupy positions of power in traditional society and to commission and be honoured by these important altarpieces.

This altarpiece was made through the lost-wax casting process, and, although it has come to be called a ‘Benin bronze’, it is actually made of brass – an alloy of copper and zinc. This was a costly material strictly regulated by Obas (Kings). Lost-wax casting is a laborious and intricate process that is still used today, and is extremely accurate in replicating detail. It involves the artist making a model out of wax, and then coating it in a clay ‘investment’, or mould. The wax is melted and drained away via an aperture and molten metal poured into the resulting void; the mould is then broken away to reveal the metal cast of the original model.

The Ikegobo is cylindrical with the Iyoba, the largest figure, flanked by her six attendants – two females and one male to each side. The Iyoba wears an elaborate headdress covered with coral beads called ‘the chicken’s beak’; such beads would have been imported and considered a royal privilege. It is thought that in its original context a carved ivory tusk would have been placed in the centre opening, perhaps symbolising the head of a chief – in this case, the Iyoba herself. Ivory denoted royal status, with Obas often controlling the ivory market. Pieces containing tusks were therefore regarded with the utmost ceremonial reverence.

The Ikegobo is a ‘Hand Altar’. Traditional Benin religion attached significance to both the head and the hand in understanding human personality and prosperity. Whereas the head symbolised reasoning and qualities an individual had been born with, the hand indicated the use to which these talents had been put in life. Offerings and prayers would have been made at the Ikegobo to bring wealth and prosperity.

Unlike other parts of Africa, Benin retained its independence from European colonising states up to the late 19th century. However, the British saw great economic opportunity in the Benin forests which they wished to exploit, and resented the custom duties and trade restrictions imposed by Oba Ovoranmwen, King of Benin. James Phillips, Acting Consul General of the Niger Coast Protectorate, set out to the city of Benin to demand an end to this, but he was ambushed and he and his officers killed. This provided the British with an excuse for annexation, and gave rise to the notorious ‘punitive expedition’ of February 1897, when 1,200 troops under Admiral Sir Harry Rawson captured and burnt Benin city. This violent action destroyed the royal palace, which was one of the most prestigious cultural complexes in Africa, and brought an end to the Kingdom of Benin. Oba Ovoranmwen was imprisoned and exiled to Calabar, and many Edo people were killed.

The British looted many thousands of objects, including a wealth of sculptures and carvings, Benin bronzes and royal treasures. The precise number of looted religious and ceremonial artworks sent back to England is unknown, but numbered at least 2,500. A great many were accessioned by the British Museum, some were sold immediately, while others were kept by individuals who had participated in the looting. The objects were dispersed across the west in museums from Berlin to Washington, Aberdeen to Exeter, as well as in private collections. The removal and subsequent sales of these works was part of the European ‘discovery’ of African art in the early twentieth century.

This Ikegobo was among the artworks looted by the British (in this case probably by George William Neville, a Lagos–based banker and shipping agent) in 1897. It was later part of the vast collection of William Randolph Hearst (1863-1951), the Californian media magnate who inspired Orson Welles’s 1941 film Citizen Kane. Hearst is said to have acquired it at the sale in London, 1 May 1930, of Neville’s collection. It eventually found its way back onto the London art market, where it was purchased from the dealers Spink & Son, in 1948, for the Henry Barber Trust for display at the Barber Institute of Fine Arts.

The Kingdom of Benin and Nigerian governments have sought the return of these looted objects since the country gained independence from Britain in 1960. The return of cultural objects to their country of origin is known as restitution. This is a very complex issue and not all non-Western cultural objects in Western museums were obtained by force or under duress; legitimate trade, exchange and gifts have also taken place and continue to do so, but the Benin bronzes embody a particularly stark example of illegitimate seizure within the context of colonialism.

The Benin Dialogue Group, which includes key Nigerian representatives (such as the Benin Royal Court and the Nigerian National Commission for Museums and Monuments) and European museum officials, was formed in 2007 to discuss these issues. A current focus is the construction of a new museum, the Edo Museum of West African Art, in the city of Benin, designed by the architect Sir David Adjaye. This will enable a permanent display of Benin works of art alongside contemporary Nigerian art. To support these discussions and provide a resource for collaborative working, the Digital Benin project is gathering information on all the dispersed Benin royal arts for a merged online database. With the agreement of the Trustees of the Henry Barber Trust, the Barber is a partner in the Digital Benin project.

The Barber Institute and the Trustees take these issues very seriously and actively follow the sector developments to be informed of best practice as well as undertaking further provenance research. For further information, please see the section on the website called ‘Unlearning Colonial Legacies’ and the Ikegobo page under ‘Research’.

Please see one of our Tuesday Talk webpages for a focused talk about this Ikegobo. 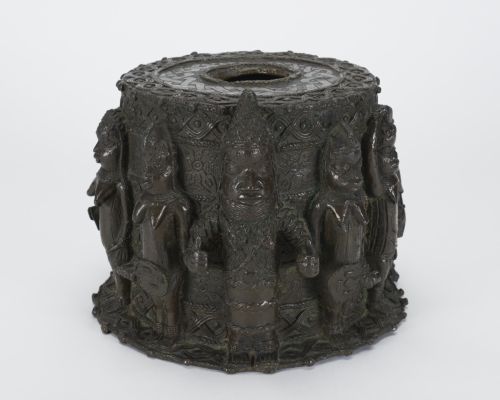