An enterprising Dutch sea captain, Douwe Mout van der Meer (1705-?), brought a young Indian rhinoceros to the Netherlands in 1741 and then toured her extensively across Europe. As the first example to have been seen in mainland Europe since 1579, she caused a sensation. She was christened ‘Miss Clara’, and images of her were painted, printed, modelled in ceramics and sculpted in marble. Only one other bronze version of this brilliantly characterful model is known, in the Victoria and Albert Museum, London. A purported third version in the Louvre never existed, a product of a misunderstanding that has been much repeated in the literature.

SEE THIS SCULPTURE IN THE BEIGE GALLERY 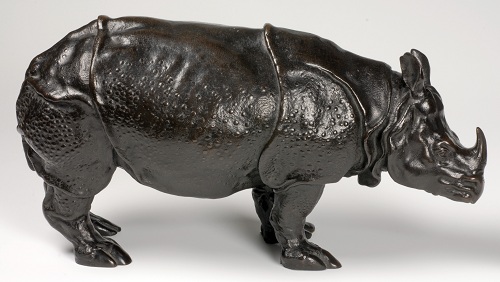