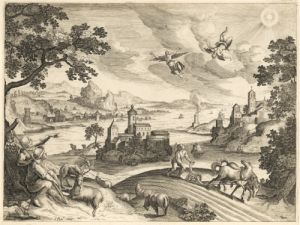 Daedalus & Icarus Etching 234 x 304 mm In a scene based on the classical story of Daedalus and Icarus and their escape from Crete, Daedalus gestures with despair as his son Icarus falls from the sky. The ploughman looks up while the seated peasants laugh and point. This story was often associated with the … Read more